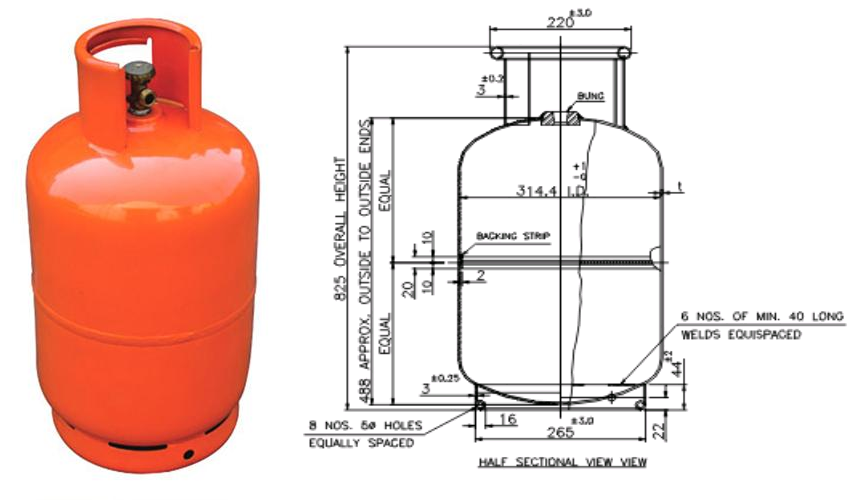 Figure 1.1 Dimensions of domestic gas cylinder. [1 &2]
Figure 2.1 shows a domestic LPG cylinder. The density of the LPG is approximately half that of water and ranges from 525 to 580 kg /m3 @ 15°C. If we consider a domestic gas cylinder, it will be filled with 14.2kg. The pressure inside a LPG storage vessel / cylinder will be equal to the vapour pressure corresponding to the temperature of LPG in the storage vessel. The vapour pressure is dependent on temperature as well as on the ratio of mixture of hydrocarbons. Domestic LPG is a mixture of 70% Propane and 30% Butane. The maximum pressure exerted byLPG at 65°C is 1.66 MPa. The details of the pressure, water capacity of cylinder and dimensions are as per Hindustan petroleum corporation Ltd. 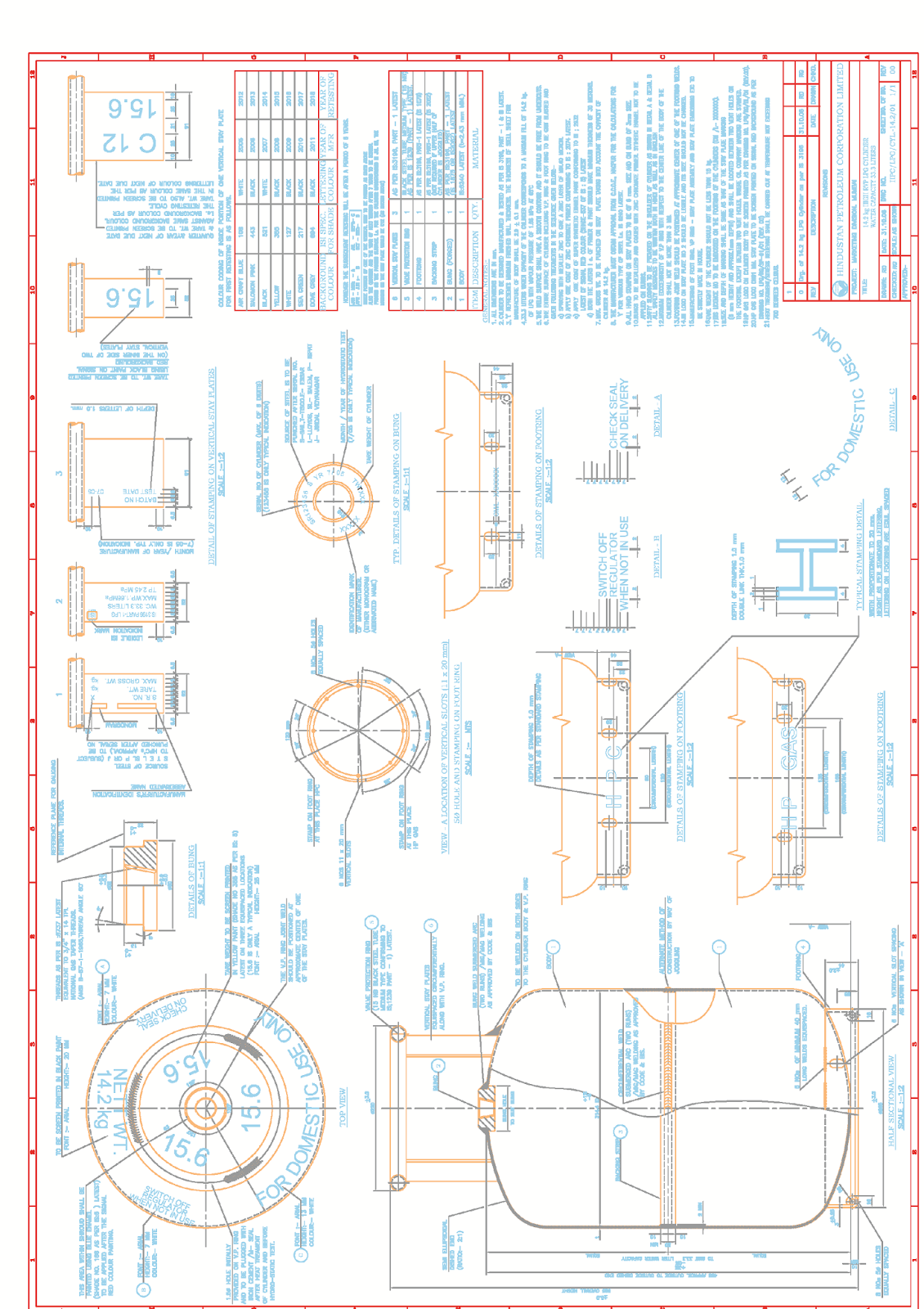 1.2.3 The axial and tangential stresses in the walls of the domestic LPG cylinder.

1.4 Modeling and analysis of pressurized part of cylinder.

Plane 42 and Plane 82 are elements having elemental behavior of axisymmetric. So using this element, the problem is solved in axisymmetric approach. For that only cross sectional area is required. In this approach, y axis is the axis of symmetry. Axial stress is the stress along y axis and tangential stress is the stress along z axis. The major difference is that plane 42 is linear and plane 82 is quad elements.
For modeling, proe is the software used. The dimensions such as inner diameter, external height and thickness are considered from Figure 1.2. An acceptable approximation of a 2: 1 Ellipsoidal head is one with a knuckle radius of 0.17D and a spherical radius of 0.90D. As part of idealization only pressurized part of cylinder is made. The welding of lower and upper half of cylinder is not considered of analysis.

For both the elements, as it is approached using axisymmetric concept, modeling and boundary conditions remains the same. A surface is made with required dimension using proe using fill option and is imported as iges. Then area is splited to 5 no. of pieces: 2 caped ends, 2 fillets and one vertical wall. Then for manual meshing, the size is controlled. After mapped messing, boundary conditions are applied. Figure 2.4 shows the loads and boundary conditions applied. 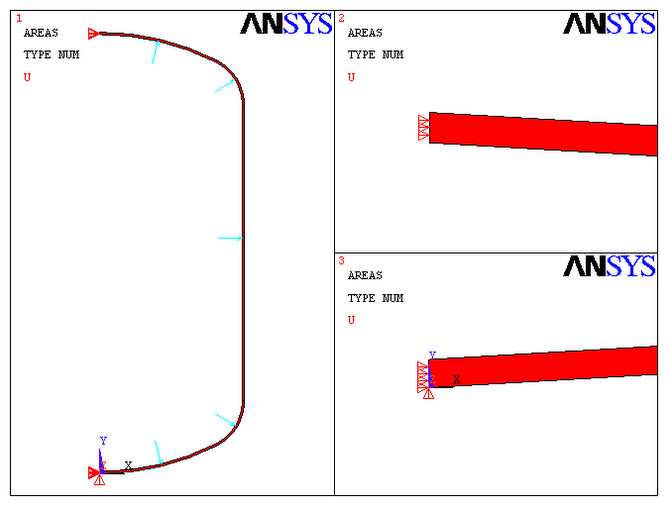 Figure 2.5 shows the edges that are controlled for mapped meshing. 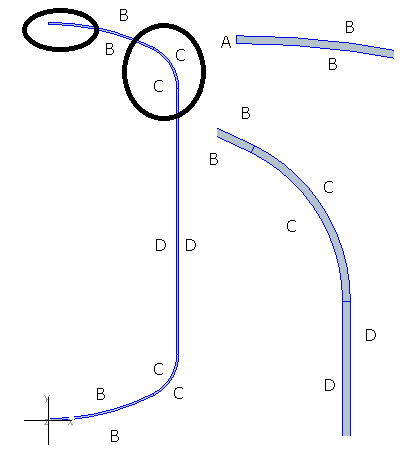 Figure 2.5 Size control for mapped meshing.
Table Two Analysis report with various meshes.
Table 2.2 shows the no of divisions applied in various lines for size control. Nodal solutions, the axial stress (σy) and tangential stress (σz) for various elements are also tabulated.
In both element, y component of stress shows the axial and z component of stress shows the tangential stress. Our calculated value of axial stress is in range of the analysis result. But the tangential stress (z component) obtained by the analytical method is not matching with the theoretical value.
While using plane 42, we need more no of elements for the convergence of result as the element is linear. If we use plane 82 the convergence is much aquarate with less no of elements. The convergence to 151 on stress in y and 171 on stress in z is reached in set 1 for plane 82 element but to reach that accurate convergence with plane 42 we have to go much heigher no of elements. While analysing 6th and 7th sets, we can identify that both stress values reached to a convergence. But the accuracy of 6th set of plane 82 is same to 7th set of plane 42. The no of elements used in plane 82 is 2/3 of plane 42.
An approximate calculation of no. of elements is shown below.
No. of elements used in 7th set of plane 42= 3 x [(2 x 200)+(2 x 60)+400]=2760 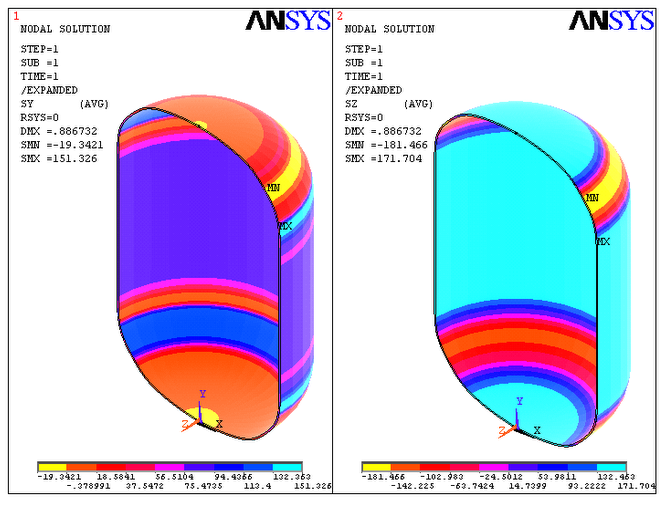 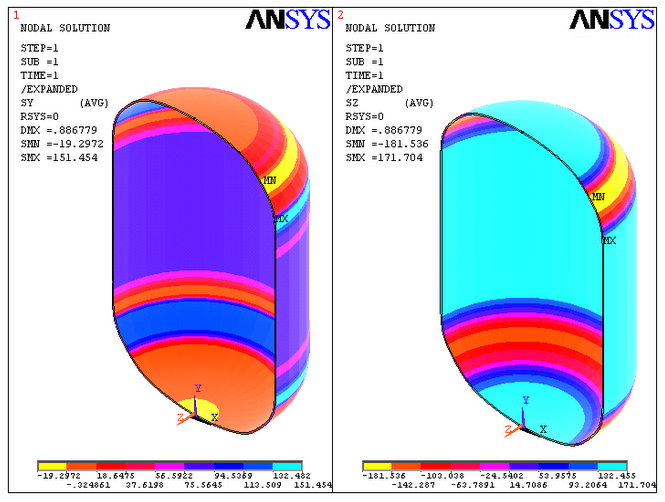 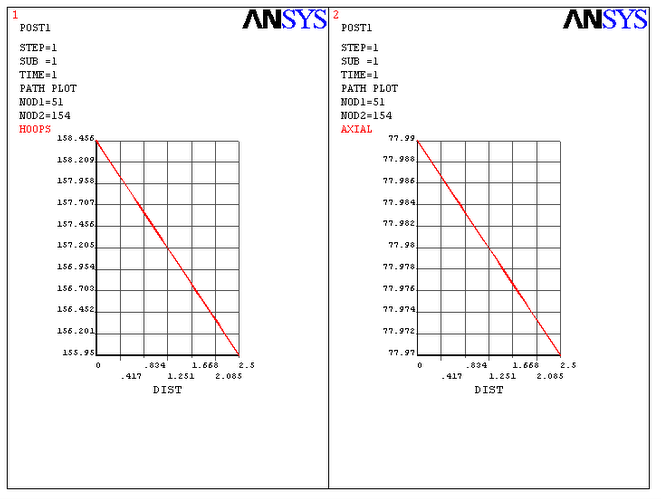 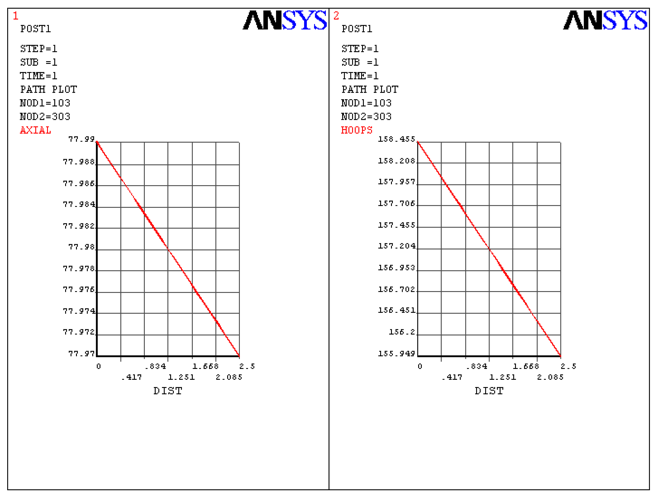 The tangential stress value is converging to 171.704 in both the cases. But the axial stress value is not converged. The major difference is the no of elements used. Path plot gives result that matches with theoretical value. But it is difficult to identify what will be happening at each area especially at capped ends. For easier comparison, nodal solutions of stress in y and z axis are considered throughout the procedures.

The pressure vessel can be optimized by rethinking the shape of the cylinder. Flat ends and spherical ends are considered for new shapes. Spherical Vessels are considered

Figure 2.9 shows the tangential stress in flat end cylinders. In that, the overall stress is in range is in range of 760. But in the areas of fillet, the stress rises tremendously. The overall displacement (deformation) is also high. The capped end is exerted with higher amount of stress. The values may be wrong but the concentration of stress will be accurate. The hoops stress in flat end is much higher compared to other shapes. 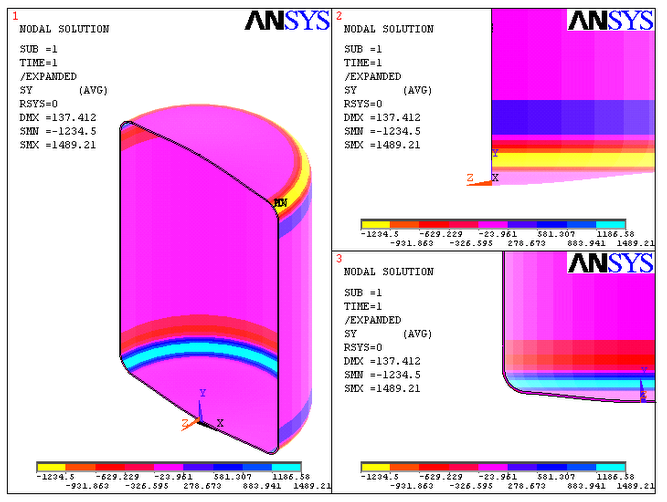 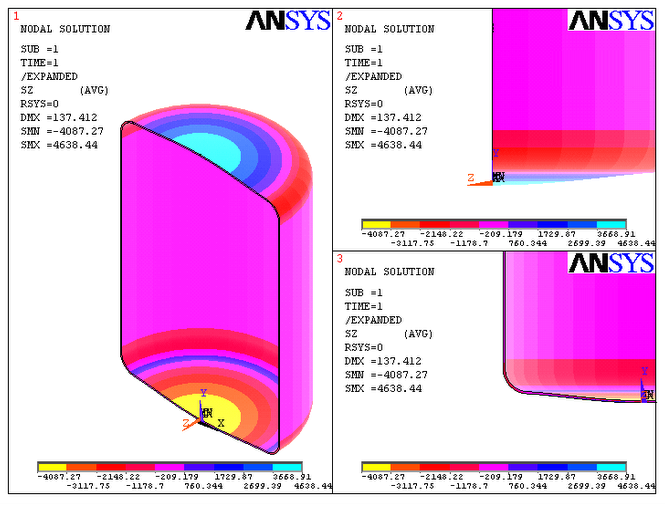 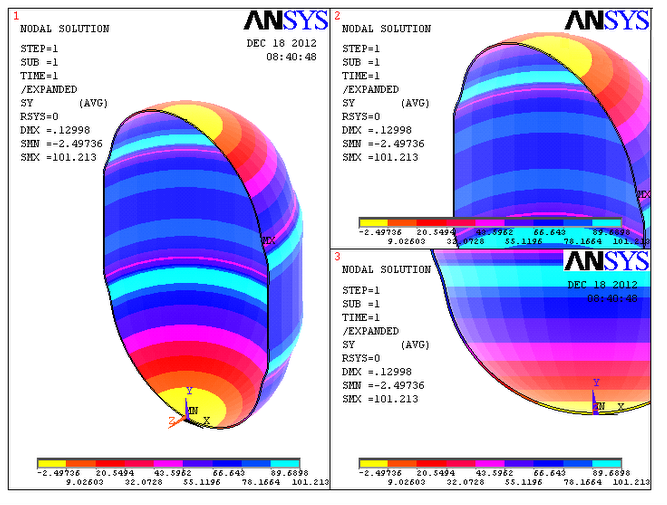 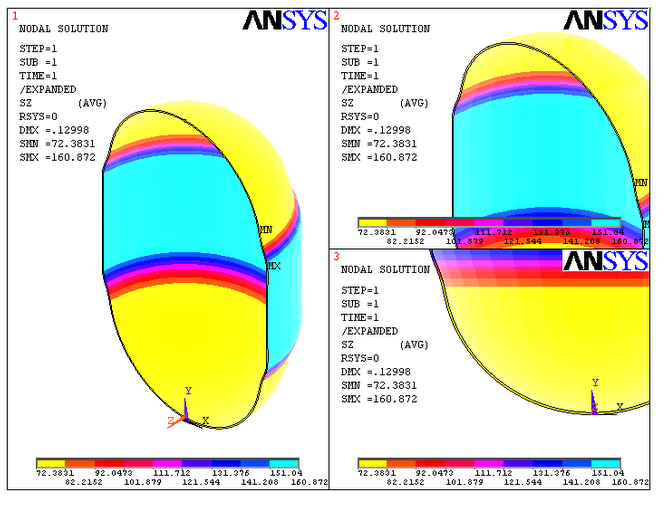 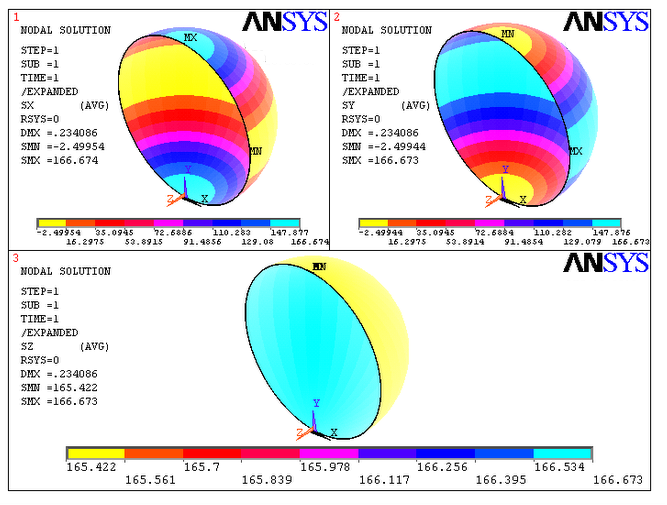 Cylinders ate transported through trucks. The uneven road and during loading and unloading, these experiences various vibrations. Vibrations are nothing else but disturbances which can be ideally considered as certain frequency. These frequencies can be calculated by Modal analysis in ansys.
If the forced frequency matches the natural frequency, the component undergoes failure. Since mass and loads acting will change the frequencies, it is better to calculate the natural frequency of filled cylinder than empty cylinder.
As part of idealization, only pressure vessel area is taken for analysis. Welding, handle and base are avoided.

If we consider empty cylinder, there will not be much disaster.

The main concern is in the case of filled cylinders that cause major destruction. So first we perform a static analysis with 2.5MPa pressure and the pre-stress effects are included for modal analysis. For modal analysis we consider 20 mode shapes. We will get many no. of frequencies as we analyze for large no. of mode shapes.

From all these analysis done, the shape that can be used is spherical vessels as the wall thickness and weight can be reduced. Due to its difficulty in transportation, spherical end vessels can be used as the cost of cylinder will increase. The frequency of disturbance during loading unloading and transportation will not match with natural frequencies of empty (20.010) as well as filled (26.154) cylinder as these frequencies cause the failure of gas cylinder.

Open chat
Need help?
Welcome to CMS
Chat with our Experts for course details, demo class, placements, offers & discounts on training or any info you are looking for.